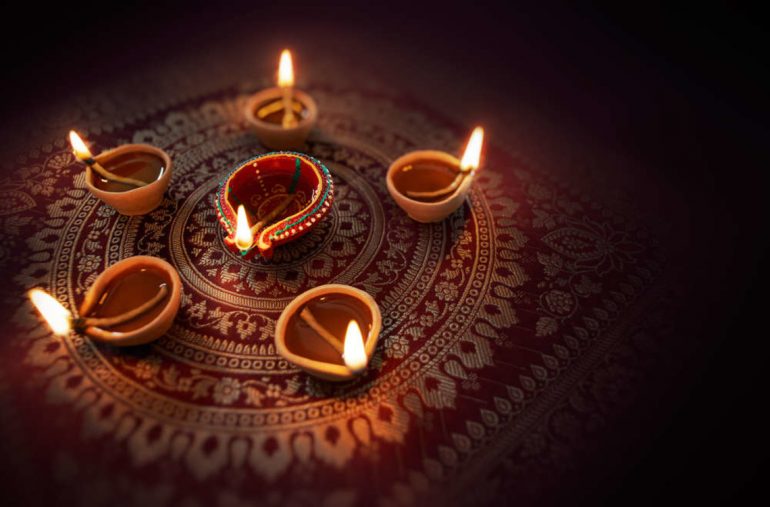 Let’s talk about the story of Deepavali.

Diwali, the Festival of Lights, is the greatest festival celebrated all over India. It projects the rich and glorious past of our country and teaches us to uphold the true values of life.

(A few years back, I even got an entirely new perspective from a post on Twitter, and blogged about it here.)

The word “Diwali” derives from the Sanskrit “Deepavali” — Deepa meaning light and Avali, meaning a row.

On Diwali day, home is awash with the orange glow of twinkling diyas (small earthen lamps) lit to welcome Lakshmi, the Goddess of wealth and prosperity.

We look upon it as the beginning of the business New Year, and invoke blessings of Lakshmi, the celestial consort of Lord Vishnu, with prayers.

The Story of Deepavali : 5 Days of Diwali 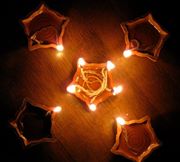 Diyas – the festival of lights

A week-long Diwali celebration has special significance for each day. Here are some of the myths, legends and folk tales surrounding this colorful festival.

Story of Deepavali : The First Day of Diwali – Dhanteras

The word “Dhan” means wealth, and this day is special to the merchant community. Homes and offices are renovated and decorated, to welcome the Goddess of wealth and prosperity. To symbolize her arrival, small footprints are drawn with rice flour and vermilion powder all over the house.

We light lamps and keep them burning all through the night. “Lakshmi-Puja” is performed in the evening, with tiny diyas of clay lit to drive away the shadows of evil spirits. 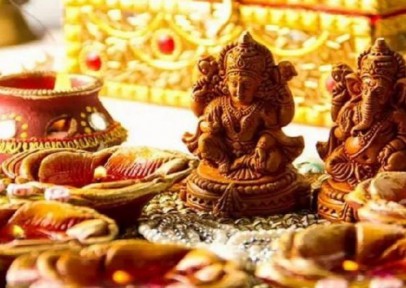 A very interesting story about this day is of the sixteen year old son of King Hima. Astrologers predicted he would die by a snake-bite on the fourth day of his marriage.

On that day, his young wife did not allow him to sleep. She laid out an array of ornaments and piles of gold and silver coins at the entrance of her husband’s bedroom and lit lamps all over the house. And she spent the night, telling stories and singing songs.

When Yama, the god of Death, arrived in the guise of a serpent, his eyes were blinded by the dazzle and he could not enter the Prince’s chamber. So he climbed on top of the heap of ornaments and coins and spent the night listening to her melodious songs. In the morning he quietly slipped away.

Since then, lamps are kept burning throughout the night on Diwali in reverential adoration to Yama.

Two Stories of the Second Day of Diwali – Narka Chaturdashi

The demon king Narakasura defeated the king of Gods, Lord Indra. He snatched away the magnificent earrings of Aditi, the Mother Goddess and imprisoned sixteen thousand daughters of the gods and saints in his harem. 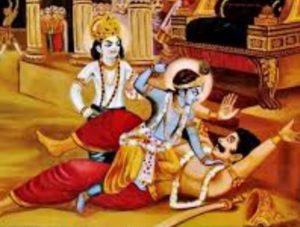 Lord Krishna then smeared his forehead with the demon king’s blood, and returned home where womenfolk massaged scented oil into his body and bathed him to wash away the filth from his body.

Since then the custom of taking a bath before sunrise on this day has become a traditional part of Diwali day.

Another legend is about King Bali of the nether world. His mighty power had become a threat to the gods. In order to curb his powers, Lord Vishnu visited him in the guise of a small boy .

Vishnu begged him for a piece of land, small enough to cover in just three steps. Known for his philanthropy King Bali proudly granted him his ‘little’ wish. Instantly, the young boy transformed himself into the all-powerful Lord Vishnu. 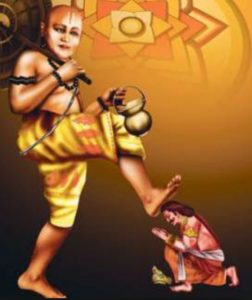 With his first step Vishnu covered the heavens, and with the second step, the earth. He then asked Bali where to place his third step. Bali offered his head. Putting his foot on Bali’s head Vishnu pushed him down to the netherworld.

At the same time, to appreciate Bali’s generosity, Lord Vishnu gave him the lamp of knowledge and allowed him to return to earth once a year (on Diwali day) to light millions of lamps to dispel darkness and ignorance, and spread the radiance of love and wisdom.

Story of Deepavali : The Third Day of Diwali – Lakshmi Puja

The propitiation of Goddess Lakshmi is one of the most important parts of Diwali celebrations.

Mythology describes how the golden-footed goddess Deep-Lakshmi alights on earth in all her celestial glory amidst chantings of Vedic hymns. The day symbolizes the sublime light of knowledge dawning upon humanity, when man’s devotion finally conquers ignorance.

We express this self enlightenment through the twinkling lamps that illuminate the homesteads of rich and poor alike. 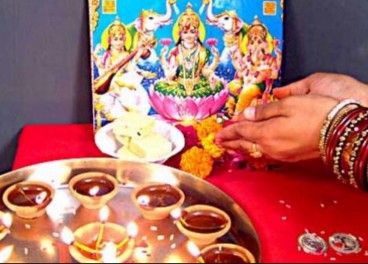 On this day Lakshmi strolls amidst her devotees, showering her blessings of plenty and prosperity among them.

A strange story lies behind the practice of gambling on this day. Goddess Parvati played dice with her husband, Lord Shiva.

She decreed that whosoever gambled on Diwali night would prosper throughout the ensuing year!

The people of Lord Krishna’s home town, Gokul, worshipped Lord Indra at the end of every monsoon season. One year, the young Krishna stopped them, insisting they pray to Mount Govardhan instead.

Furious, Lord Indra sent a terrible rainstorm to submerge Gokul. It lasted for weeks. But Krishna saved his Gokul and protected his people by holding up Mt.Govardhan on his little finger, shielding them with it like an umbrella. 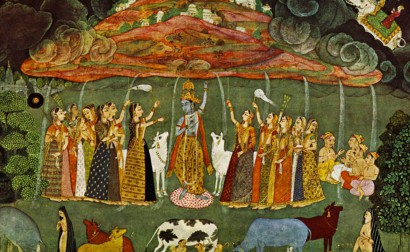 The fourth day of Diwali, Gudi Padwa, is also symbolic of love and devotion between husband and wife.

It is seen as the most auspicious day to start any new venture. In many Hindu homes, it is customary for the wife to apply red ’tilak‘ on her husband’s forehead, garland him, and pray for his long life.

In appreciation of her tender care, the husband gives her a costly gift (and you thought it was ALL for love! 😉 ).

A Story of the Fifth Day of Diwali – Bhayya Duj

Yama, the God of Death, visited his sister Yami on this day. She anointed his forehead with the auspicious ‘tilak‘, garlanded him and delighted him with special sweets and dishes.

They enjoyed a wonderful day in each other’s company, and while parting Yama gave her a special gift as a token of his love. In return, Yami also gave him a lovely present made with her own hands.

Yama announced that anyone who receives tilak from his sister will never be thrown. Since then people celebrate the fifth day of Diwali as a symbol of love between sisters and brothers.

I hope you enjoyed the story of Deepavali, and will share these short, interesting stories about the five days of Diwali with others in your family.

Diwali has always been more a social than religious festival. It is a personal, people-oriented festival when we forget enmities, meet families and friends, enjoy ourselves, and establish or renew a world of closeness.

A festival of light and beauty, Diwali encourages artistic expression and builds a strong sense of community. The diverse cultures and customs of India mingle together in a wonderful celebration of joy, light and unity.