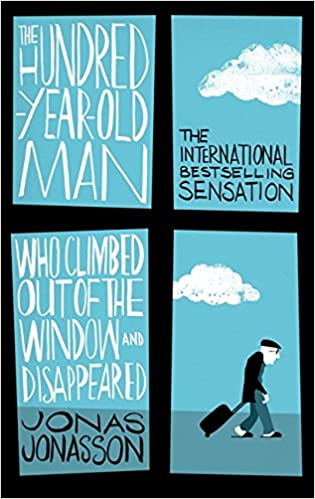 Just imagine this wild situation. There’s an elderly gentleman. He’s in a nursing home. It’s his 100th birthday. And he chooses to slip out through the window, missing his own party, to… do what?

Right from the beginning, this book is irresistible!

Allan has no idea what he’s going to do. But he gets going! Decides to wing it. Figure things out as he goes along.

“Things are what they are, and whatever will be, will be.”

The result is a hilarious story with the most improbable twists and turns you’d ever imagine.

He makes friends easily. And enemies, even more so.

They’re with him on a journey with the most neck-snapping ups and downs. One that begins with a discovery that he’s now carrying a suitcase stuffed with cash – and he doesn’t know whose it is!

“When life has gone into overtime it’s easy to take liberties.”

An impulsive red-head who swears like a sailor, corpses that turn up on a railroad handcar, and even a runaway elephant make their appearance early in these adventures.

You’ll thrill at the action. Despair at the risks he takes. Wonder at the extent of his acquaintances. Marvel at how intensely he’s lived.

And as our hero relates meetings with Chinese leader Mao Tse Tung and North Korea’s Kim Il Sung, confabulations with not just one but two American presidents, and encounters with several other dignitaries, you’ll begin to appreciate just how vast a span one hundred years can be!

Plus, the plot twists will keep your head spinning (in a nice way) as you look forward to turning the page and being surprised – yet again.

A perfect read for a lazy weekend, or a relaxing vacation.

Jonas Jonasson is a brilliant storyteller. His other books are gems, like ‘Hitman Anders and the Meaning of It All‘ and ‘The Girl Who Saved the King of Sweden‘.

But ‘The 100 Year Old Man Who Climbed Out The Window‘ is my favorite – for good reasons. It’s the first of his books that I read, so it set the bar really high. And his other titles, though great reads on their own merit, simply don’t match up to this one.

“Never try to out-drink a Swede, unless you happen to be a Finn or at least a Russian.”

Interestingly, when I looked at other reviews of ‘The 100-Year-Old Man Who Climbed Out the Window and Disappeared‘, I found them to be a mixed bag.

Some enjoyed Jonasson’s writing style – but others didn’t. They thought the story wasn’t funny enough, or lost interest midway through.

The Sunday Times, however, called it ‘A mordantly funny and loopily freewheeling debut novel about ageing disgracefully’ – and I think that’s very representative of this irreverent, humorous, gripping story.

On a serious note, however, what you’ll probably take away from reading ‘The 100 Year Old Man Who Climbed Out The Window‘ is an appreciation for the indomitable spirit, boundless energy and self-deprecatory sense of humor that many elderly people nurture, unrecognized.

“It had been exciting, the entire journey, but nothing lasts for ever, except possibly general stupidity.”

At the very least, you’ll think twice before labelling an ‘old person’ you’ve not quite understood as being ‘dull and boring’.

Allan Karlsson redefined age for me, in a unique, special way.

And for that reason, if nothing else, ‘The 100-Year-Old Man Who Climbed Out the Window and Disappeared‘ will be special to me… as I hope it will for you.