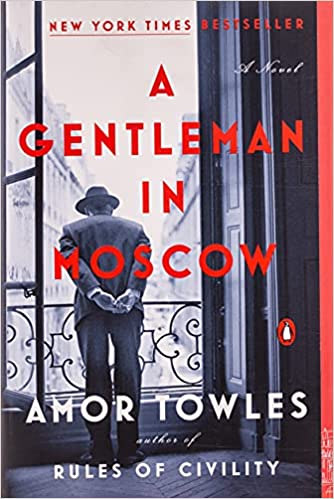 Gripping and captivating right from the moment we meet Count Rostov, a hapless victim of post-Tsarist Russia’s politics, as he begins a lengthy internal exile within the Hotel Metropole in a 1922 Moscow, Amor Towles’ ‘A Gentleman in Moscow‘ delights and entertains us through ups and downs that might quell a lesser man – but only reveal the Count’s strength.

Can a book review ignore or sidestep the story itself?

At least, this review of “A Gentleman in Moscow“ is going to.

Not because the story wasn’t good. No. It was great.

Seismic shifts in politics and ideology of a post-Tsarist Russia mean the Count Rostov might have survived being shot as an “enemy of the State” – but he still will remain an exile within Moscow’s Hotel Metropole.

And after a delightful sequence of twists and turns, the story ends on a very satisfying note.

Still, I won’t talk about it. Because I don’t want to take away even an iota of your enjoyment while reading it yourself!

Ah, and how many feelings it sparked!

The mark of a good book is how intently the story line and characters fascinate you; the way plot twists develop and progress to a climax; a sense of wanting to flip the pages faster to see how things turn out next.

A great book, though, makes you feel a lot of things. It resonates within your heart, rings inside your head, echoes through your psyche.

It enmeshes itself with a reader, inextricably becoming a part of him or her.

And at the end, it lingers on… forever.

“A Gentleman in Moscow“ is a great book. And to save my life, I couldn’t tell you exactly why!

When I began reading it, accompanying Count Rostov in his internment within a luxury hotel where he’s been an honored guest, I kept thinking about one of my favorite movies.

In ‘The Shawshank Redemption‘ a man convicted of a crime he didn’t commit serves a lengthy prison sentence alongside Red Redding (played by Morgan Freeman).

Over the years, Red talks about how he’s become “Institutionalized”, how he isn’t sure he could survive on the outside, beyond the disciplined rigor of prison life.

In a startling flash of clarity I saw my present ‘comfort zone’ as a velvet-padded cell, softly suffocating and subtly stifling. The familiar solace of known, regular, every day stuff holds us back from a bold dash into a promising (if risky) freedom that beckons beyond the ‘walls’.

And I was already inside them – without quite knowing!

But the story I was now reading, ‘A Gentleman in Moscow‘, presented the flip side of that conundrum.

Of the enforced entrapment of a free spirit within a bubble, a secure cocoon from which one may not escape – even if one wants to.

And this time around, mirror images of these long-festering questions popped up.

“If a man does not master his circumstances then he is bound to be mastered by them.”

How brilliantly the Count does “master his circumstances” makes up the entire story.

One that I refuse to ruin for you, in case you’re planning to pick up the book, by revealing even its broad outline.

But after several fantastic sequences, coincidences and eventful happenings, as is only to be expected in a book of this nature, we reluctantly wend towards the finishing line.

That makes me reflect on what I’d just read.

I’ve often mused about my travels.

Having just returned from a trip to a country 7,000 miles away, repeating a journey I’d last taken before celebrating my first birthday, I had this insight.

In the five decades between these flights, I’ve gone around the world.

Yet a good 85% of my life has been spent within a tightly circumscribed radius of just 7 kilometers!

On one level, that sounds incredibly restrictive.

On another, I look back over my life and see amazing richness and variety.

And in the end, the biggest lesson I take away from ‘A Gentleman in Moscow‘ is this:

It isn’t about how big your canvas is, but WHAT YOU PAINT ON IT, that truly matters.

You may be confined to a village or town.

Or maybe limited to a neighborhood within it.

Or even a single building.

It doesn’t matter. You can still enjoy things.

Impact and influence the world around you.

Yes, you can LIVE.

“Imagining what might happen if one’s circumstances were different was the only sure route to madness.”

That isn’t the only brilliant philosophy espoused in Towles’ novel.

There are so many.

“…for our children to establish such vivid impressions of this particular June, we must relinquish our claims upon it.”

“So that they might remember, we must forget,” Vasily summed up.

“Exactly!” said the Count. “But should we take umbrage at the fact? Should we feel shortchanged by the notion that their experiences for the moment may be richer than ours? I think not. For it is hardly our purpose at this late stage to log a new portfolio of lasting memories. Rather, we should be dedicating ourselves to ensuring that they taste freely of experience…. For it is the role of the parent to express his concerns and then take three steps back. Not one, mind you, not two, but three. Or maybe four. (But by no means five.)”

And then, there’s the lovely pristine prose that borders on sublime poetry.

It’s these skilfully crafted passages that had me re-reading them over and over, slowing down to enjoy the artist’s talent, and taking twice as long to read this novel as any other.

“When one turns seventeen and begins to experience that first period of real independence, one’s senses are so alert, one’s sentiments so finely attuned that every conversation, every look, every laugh may be writ indelibly upon one’s memory.

And the friends that one happens to make in those impressionable years? One will meet them forever after with a welling of affection.”

Here are a few more favorite excerpts from “A Gentleman in Moscow“:

“For as it turns out, one can revisit the past quite pleasantly, as long as one does so expecting nearly every aspect of it to have changed.”

“History is the business of identifying momentous events from the comfort of a high-back chair.”

“I suppose a room is the summation of all that has happened inside it.”

“Life does not proceed by leaps and bounds. It unfolds. At any given moment, it is the manifestation of a thousand transitions.”

Ultimately, I think I’d agree most with the WSJ’s review of “A Gentleman in Moscow“:

“The novel buzzes with the energy of numerous adventures, love affairs, twists of fate and silly antics.”