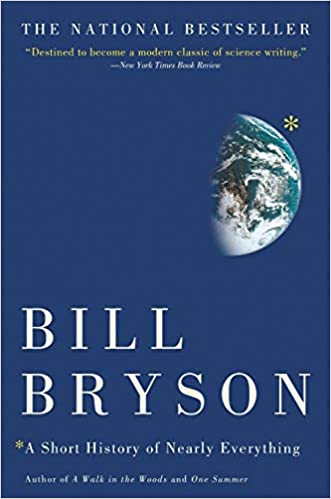 What a fascinating journey down the history of our universe, planet and species. In ‘A Short History of Nearly Everything‘, Bill Bryson invites us to join him on an eye-opening voyage of exploration and learning – one that spans just about everything that’s ever happened in history!

It’s just one mindgasm after another!

Many years ago, I noticed this book on my shelf… and ignored it. Over time, it vanished from sight. I don’t know what happened, or where it went. And didn’t much care.

For my last birthday, my sister gifted me another copy. Once again, it languished for almost a year on my long list of ‘books to read’… until one fine day, two weeks ago, I opened it to start reading.

And that was that. I was hooked. Instantly. Irretrievably.

At times, I’ve wished there were books I’d read a few years sooner, and carried the lessons from for longer. ‘A Short History of Nearly Everything‘ is a book I wish I’d read… back when I was in school!

Boy, how it might have altered my life. My choice of career and interests. My future learning and hobbies. It would have been transformational.

In fact, even now, it will.

Just the reading material I’ve got from references in this book will last me happily for learning stuff through another couple of years – at least. Each topic is so fascinating, the hardest part will be picking one to start studying first!

So let me share a little about Bill Bryson’s book itself.

‘A Short History of Nearly Everything‘ takes a reader on this amazing, awe-inspiring journey through time.

It begins with the formation of our universe. Explores the innovative and insightful leaps by scientists that helped us understand more of it – the size of our Earth, the formation of stars, the distances of galaxies, the miraculous vastness of space.

We’re 95 million miles away from the Sun. And 365 million miles from Jupiter. Which is itself FIVE TIMES further away from Neptune. In a fast rocket going @56,000 kmph, it’d take us 9 years to get to Uranus. And 12 years to reach Pluto.

But on the outskirts of our Solar System is the Oort Cloud – which is so far off, it would take our rocket TEN THOUSAND YEARS to get there! And the closest star, Proxima Centauri (one of 3 in Alpha Centauri) would take 25,000 years to reach.

After reading this, I pause to think.

A sense of awe and wonderment creeps over me. We truly are alone, cut off from all our celestial neighbors by vast expanses of space. Tiny beings on a minuscule lump of rock meandering across the limitlessness of our universe.

And then, the author switches to ‘looking inside’ – and we deep dive into atoms and their structure.

Go into the spaces within matter, explore quantum dimensions, examine the discovery of elements and radioactivity, unravel the mysteries of chemistry and alchemy.

Only then, after we’ve been grounded in understanding the physical and chemical construct of our world, do we enter the altogether mind-blowing and fascinating realm of life – and appreciate biology from a perspective that, even as a life sciences proponent for all my working years, I had never seen explained in such a delightful manner before.

If I had read ‘A Short History of Nearly Everything‘ as a schoolboy, I might have chosen to immerse myself into a different facet of biology than medicine. And I am furiously, desperately passionate about medicine… which tells you what you might look forward to, how you might feel too, when you read this brilliant book!

As I turned each page, completed every chapter, a thought kept resonating in my mind: “How little we know. How silly we are to think we do.“

An excerpt from the book:

“Thanks to the work of Clair Peterson, by 1953 the Earth at last had an age everyone could agree on (4,550 million years). The only problem now was that… it was older than the universe that contained it!“

A Short History of Nearly Everythingis a truly humbling read.

One that’ll knock the hot air out of you – and prepare you to view our universe with awe, respect, and yes, a little fear, too.

It’s incredible that Bill Bryson manages to do all of this without drowning a reader in arcane technicality or dull lectures. Instead, he manages it through the use of gripping personal stories and amusing anecdotes that humanize intellectual giants.

Stories like this one about Guillaume le Gentil, who set out from France in 1761 to India to observe the astronomical rarity of Venus crossing the Sun – an event so rare that it happened only once in over a century.

Each time, there were two crossings, but 8 years apart. Thanks to bad weather, le Gentil was stuck at sea and couldn’t study the event. Determined, he set up in India for the next one… EIGHT YEARS later!

Finally, after a long time, the big day rolled around. But to le Gentil’s disgust, a bank of clouds covered the sun for nearly the entire hour and 34 minutes of the planet’s crossing.

His long wait had been fruitless!

Disappointed, he decided to return to France. On the trip to the port, he was hit by a severe dysentery which nearly killed him. Haggard, wasted, disappointed, he took a ship home – only to be hit en route by a terrible hurricane that almost wrecked the craft.

Finally, eleven and half years after he left, he arrived home – only to discover that his family had had him declared dead in his absence… and plundered his estate!

Finally, it was James Cook who was the first to correctly figure out that Venus was around 150 million kilometers from Earth – by observing the same 1769 crossing that foiled le Gentil’s well laid plans.

This story arc repeats itself endlessly through the history of science and discovery. Bryson quotes an archaeologist:

“First, they say you’re wrong. Then, they say it isn’t important. Finally, they credit the wrong person!”

There are countless vignettes that offer us a peek into the lives, travails and vanities of the greats of science whose discoveries shaped our understanding of the universe. It makes this a book light and entertaining enough to captivate all readers, young and old.

You don’t want the book to end.

You want it to keep going and going.

But eventually A Short History of Nearly Everything does wind to a close, and ends on a sobering, even heart-rending note…

When it talks about extinctions, and our role as humans in it. About how we’ve been callously casual, even perverse, in our wilful and cheerful destruction of species that have struggled to survive for aeons.

“Nobody knows quite how destructive human beings are, but over the last fifty thousand years or so, wherever we have gone, animals have tended to vanish, often in astonishingly large numbers.”

With that observation, Bill Bryson signs off thusly:

“We really are at the beginning of it all. The trick is to make sure we never find the end. And that will require a lot more than lucky breaks.“