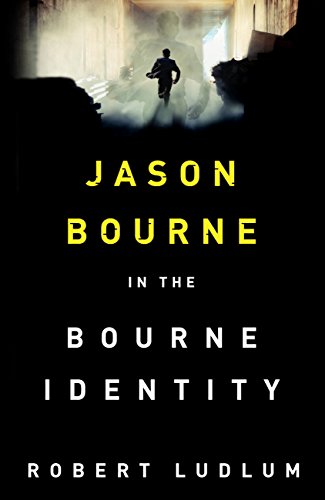 A gripping, edge of the seat thriller from a master storyteller, ‘The Bourne Identity‘ sets the standard for an engrossing action adventure – against which other books will shoot in vain!

We wake up most mornings – and know exactly who we are.

Not so, the hero of Robert Ludlum‘s fast-paced thriller.

The story begins with a man washed up on a beach… and no memory of who he is.

An intriguing sequence of events leads to a sketchy search for his identity. A picture emerges, a bit at a time – only to paint a scary, horrifying image. One that grows murkier as new pieces emerge.

If you pick up this novel, start reading it, and then manage to put it down any time before you’re through the initial 50 pages, you must have enormous will power.

Not the first time I read, nor the many others. The pace of Ludlum’s writing just doesn’t slow down for even a second.

And it isn’t as if everything eases into a gentle flow after that early burst. Nope. The hectic speed of the action never lets up at all.

A shootout in a bank. A hijack drama. A car chase.

One follows the other in rapid fire sequence.

We fly around the world, from a remote beach on an island to Europe’s top capitals, then across the ocean to America. Rushing from city to city in a breathless hunt.

For a man. For a secret. For a purpose.

I find it hard to decide whether ‘The Bourne Identity‘ is among my favorite reads.

Maybe it’s because of the story, a gripping thriller that sets the stage for a trilogy of novels (later expanded to an even wider series).

Or because of a passing similarity to another favorite – Frederick Forsyth‘s ‘The Day of the Jackal‘, an adventure starring a paid assassin involved in political intrigue.

Or because of the storytelling style and relentless energy of the narrative that literally forces you to keep turning the pages, unable to summon up the resolve to put it down and come back to it later.

And there are so many surprise twists and turns along the way. The characters are vivid and human. You get to relate to them, what they feel and experience as they are whipped along the rollercoaster ride that ‘The Bourne Identity‘ takes them on.

Many such books hurtle towards a grand finale that’s quite a let down. Not ‘The Bourne Identity‘. If anything, the Great Revelation at the end ranks among the best ever in a spy thriller novel.

While it may not be quite as startling today, thanks to movies that have pushed the extremes of the human mind and its capabilities, when it was first launched ‘The Bourne Identity‘ boasted a paradigm shifting climax. You won’t see it coming – and it startles and shocks for exactly this reason.

Reading the novel made me want to go to Switzerland. To walk down the Bahnhofstrasse. Gaze at the nondescript numbered doors that led into private banks. Feel the energy of billions of dollars in wealth, locked securely in unbreakable vaults.

And it made me wonder about my own identity. How it is defined. How nebulous it is, conceptually. How easily it could be lost. How efficiently it can be erased, even edited.

Years after first reading ‘The Bourne Identity‘, I bought the trilogy of books for my library. It still has pride of place on our bookshelf. I pick it up to browse, from time to time… especially when I hit a writer’s block and want to unlock my creativity by reading some great action writing.

But even if all you want to do is enjoy an exciting thriller, pick up ‘The Bourne Identity‘.

I bet you won’t be able to stop until you follow it up with the sequels – ‘The Bourne Supremacy‘ and ‘The Bourne Ultimatum‘ – which continue the duel in the dark between the world’s most feared terrorist/assassin… and his alter-ego.

Enjoy the saga of Jason Bourne…