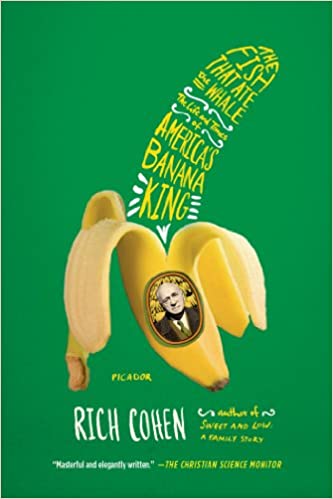 ‘The Fish That Ate The Whale’ is Rich Cohen’s brilliant biography of Sam Zemurray, a rags-to-riches story of the man who built a business empire around banana imports – and went on to change the world.

I first heard of this book (and Rich Cohen) through a reading list recommendation by Ryan Holiday. Curiously, I picked up this one first – and was instantly gripped by the fascinating tale of banana king Sam Zemurray.

An immigrant to the United States from Russia, he arrives with almost no money, then hustles and jostles up the ladder of corporate success… eventually reaching the very top.

His story begins with an outline of his ambition and drive.

“The business had to get big to survive. Go all in, or get out. Sam was young and wanted to bet everything: great fortunes come from big plays.”

It progresses to his huge wins.

“He had left as an ambitious player who had cashed in his chips. He was returning as the man who had won the casino itself.”

To become CEO of the world’s largest fruit company United Fruit, Sam Zemurray had to overcome forbidding challenges through sheer determination and strength of spirit.

“His tragedy was not that he was worse than other businessmen, but that, despite all his brilliance and good intentions, he was no better.”

His journey is thrilling and it’s a joy to accompany the young entrepreneur as he discovers the potential of importing bananas, innovates techniques to keep them fresh, goes head to head against competition, and then uses ruthless tactics to beat out everybody else.

I learned a lot of things about bananas and their cultivation. About Central American nations and their politics. About covert influence into their internal affairs.

But above all, I learned about a determined man who tweaked all these variables to his advantage – and built a mega-business around the import of fruit.

As a student of business, leadership or entrepreneurship, there’s a lot of fodder here. Rich Cohen’s writing is absolutely compelling. I have since read other books of his, but ‘The Fish That Ate the Whale: The Life and Times of America’s Banana King‘ remains a favorite.

This inspirational biography about a man who built a global conglomerate that would soon be valued at over a billion dollars, transforming Central America in the process (and creating the familiar label ‘Banana Republic’), will leave you stunned and amazed.

Sam Zemurray lives the American Dream. And the story about how he reaches for it involves intrigue, drama and a fair bit of violence.

“The greatness of Zemurray lies in the fact that he never lost faith in his ability to salvage a situation. Bad things happened to him as bad things happen to everyone, but unlike so many he was never tempted by failure. He never felt powerless or trapped.”

‘Fish That Ate The Whale‘ is a book that will live with you for a long time. You’ll find yourself remembering Sam Zemurray at the strangest of occasions, recall passages from his incredible life’s journey to motivate, encourage and inspire yourself over the years to come.

In the end, ‘The Fish That Ate the Whale‘ is a biography that ranks among the best because it makes you want to be a bigger, better person than you ever thought you could before.