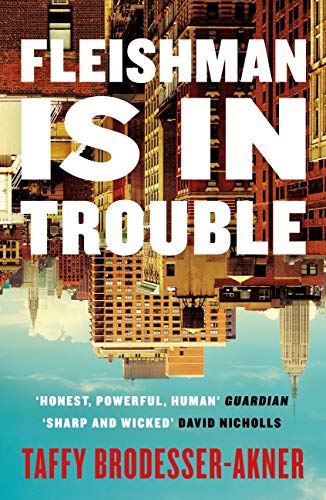 ‘Fleishman Is In Trouble’ isn’t about the superficial or pseudo-ponderous agitation of teens or young adults. It’s a compelling story about weightier and harder-to-resolve dilemmas… ones that have to do with the very meaning of why we exist, marry, work, dream and break up.

Dr.Toby Fleishman, consultant hepatologist, wakes up to discover his two children asleep in the flat – and a short post-it note on his bedside table saying their mom was going to a yoga retreat.

That’s the last he’ll hear from Rachel… for a few weeks.

This is a complex debut novel. With a deeply introspective exploration into the minefield called ‘middle age‘.

The characters are delightfully fleshed out.

You get to know them, understand how they think, feel their angst and anger, and share their passage through life in a visceral sense. You’ll definitely identify with one or the other, maybe a combination of a few – and relate to others through actual people in your own life.

And the story line is brilliant.

Tracing the course through life of three high school friends as they progress to their forties, “Fleishman Is In Trouble

” addresses concerns and controversies, tensions and troubles, problems and poignancies anyone who has lived past 4 decades will surely appreciate and resonate with.

When the story begins, with a soon-to-be divorced Toby Fleishman discovering his estranged wife has dropped off his two kids in the apartment while he was asleep, I thought it was headed in the direction of one of my all-time favorite books – Avery Corman‘s “Kramer versus Kramer

(Sideline: Unable to locate a paperback copy, I hunted online for almost a month before locating a copy on eBay that I bought for $35… some ten years ago!)

Well, though both stories had a loving dad who took care of his kids, the similarity ends there.

Although Toby Fleishman stays center-stage through most of the story, the book is really about the two women – his wife Rachel, and friend Libby – who pursue ambitious careers, fuelled by…

“…the promise of a liberated society that we (women) could do anything we wanted… be successful”.

When the reality of gender inequality first rears its ugly head, Libby chose to back off, while Rachel barged ahead.

Both seem disillusioned with what’s happened since, trying to figure out their choices in the context of how their lives unfolded, and where they are at the moment.

“When you did succeed, when you did outpace, when you did exceed all expectations, nothing around you really shifted. You still had to tiptoe around the fragility of a man…”

Even if the portrayal is of how hard women find it in a lopsided career market, I personally saw this as a story about the broader middle-aged representation of broken dreams and unfulfilled desire. One that’s gender-neutral, and more universal.

Toby’s career, and the lives of other male characters in the tale, also run aground just as badly in some respects as those of the ladies. The problem isn’t in your chromosomes – it’s in your age!

And maybe that’s also true about a reader who picks up this book.

“. In it, I occasionally found the 30 year-old protagonist’s character grated on me – probably a function of a generation-gap?

This feeling never cropped up while reading about Toby or Rachel Fleishman, Libby or Seth, Sam or Miriam. I wonder if a younger reader would sound as enthusiastic about following their middle-aged travails, though.

“In your novel, you are God,” a writing instructor once taught me. He meant that as an author, you get to choose what anyone in your story says or does – and get to be inside their heads all the while.

With narrative storytelling, a reader usually doesn’t enjoy that privilege.

That’s why, as a writer, I was in awe of Taffy’s literary sleight of hand that highlights multiple perspectives, opinions, angles.

A stacking of “If…” or “How…” or “As…” to offer explanations, showcase viewpoints, and toss up possibilities to address a situation from various dimensions… growing more complex and involved as the story progresses.

“How his eyes filled at the sight of the gleam of her geometry hair. How the blue of her eyes was both cold and hot. How the Cupid’s bow beneath her nose was a dewdrop mountain to be climbed; how it mirrored the cleft in her chin with the kind of symmetry that science said initiated male sexual imperative. How the sharpness of her face seemed like a correction to the Semitic girls he was bred to want… How he was made dizzy, how he utterly dissolved in lust, by the way she stuck a hip out when she was trying to decide something. How she came with him to California for his grandmother’s funeral; how she sat in the back and looked sad for him and came to the house afterward and helped put all the catered food on trays.”

The story truly comes alive in the latter part, where Libby’s narration is incisive, unfettered and frank.

Be it while having her own say, or framing Rachel’s point of view for the reader, Taffy Brodesser-Akner hits her stride.

These are some of my favorite quotes:

“If you are a smart woman, you cannot stand by and remain sane once you fully understand, as a smart person does, the constraints of this world on a woman.”

“We fall in love and we decide to marry in this one incredible moment, and what if everything that happens after that is about trying to remember that moment?”

“You hold hands while you’re walking down the street when you’re happy; you turn away icily to stare out the window as the car goes over the bridge when you’re not; and exactly none of this has anything to do with that person’s behavior. It has to do with how you feel about yourself, and the person closest to you gets mistaken for the circumstance.”

“For a few years Hannah would straddle being both people, and that was just the worst. Both for her, to endure innocence and maturity in the same body, and for him, to watch the innocence vanish in drips until it was gone.”

You think, Maybe if I excised this thing, I’d be me again. But you’re not you anymore. That hasn’t been you in a long time. It’s not his fault. It just happened. It was always going to just happen.”

I loved how the book ends.

Not with a melodramatic twist that’s unbelievable, sensational, or both.

Not with a clean, clear solution that wishes away all the niggling issues that crop up between people in decades-long relationships in one huge all-embracing sweep… or in a few impassioned tussles between the sheets.

Instead, Brodesser-Akner ends her book leaving room for imagination and intrigue.

There’s space to paint your own picture. Blanks to fill any way you like. No prescriptive suggestions or clarifying insights. It’s a book for adults, not kids!

And its timing is perfect.

If the story had stopped a chapter short, before we hear Libby’s reflective revelations, it would have been too superficial and unsatisfying a tale.

“Divorce is about forgetfulness – a decision to stop remembering the moment before all the chaos – the moment they fell in love, the moment they knew they were more special together than apart. Marriages live in service to the memory of those moments.”

If it had gone further and tried to flesh out future scenarios for the Fleishmans, it might have sounded overly prescriptive.

As it is, everything is replete with possibility and potential.

And I can see myself mulling over what might happen next in the lives of these fictional friends I somehow seem to have grown familiar, comfortable, even friendly with through Taffy’s lovely writing.

In the ultimate analysis, the acid test of a “good book” is this – as a reader, are you tempted to linger on inside the author’s storyworld?

I finished reading “Fleishman Is In Trouble

” on a lazy Sunday afternoon, and relish the idea of sticking on in Toby-and-Rachel land… until the compulsions of a fresh work week will coerce me back into the real world.

But that’s still a good few hours away, so…