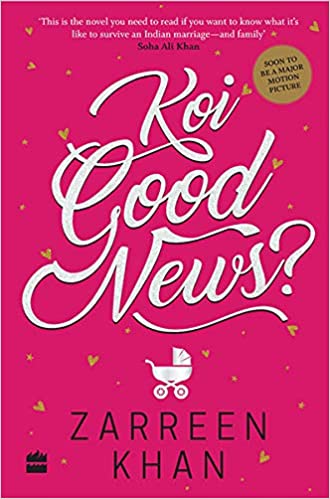 Zarreen Khan’s ‘Koi Good News?‘ is a deliciously humorous peek into the pregnancy of a Punjabi couple, Mona and Ramit Deol. By the end of this nice little story, you’ll feel more informed about how different people think, feel and behave – when a family is expecting a new addition!

Crafted in a unique storytelling style, you’ll find yourself flipping alternately from inside one’s head to the other’s, getting to see the same incident from two different perspectives.

Once you get the hang of it, this is fascinating.

And at times, incredibly funny!

Mona: He murmured something about mood swings. I wanted to hurl my shoe at him.

Mona: I put his hand on my stomach and he grinned at me. It’s magical!

Mona: Such great food! What a wonderful evening! I say as much to Ramit.

Mona: I turned to Ramit and asked him how he was planning to tell his friends.

Ramit: I have to tell my friends? Won’t that just make them picture us having sex?

And there are some lovely, poignant moments that beautifully bring out the marvel and miracle of new life, and a family’s always-over-the-top reactions to the arrival of a child.

Finally mustered up the courage to look at the test. Those were definitely two lines. Two. Lines. Oh God…

He asked if we wanted to hear the heartbeat. Suddenly, there was a magical drumming from within me.

And that’s when I felt it. I felt a little ball of joy rolling in my stomach.

It’s like I’m giving birth to Bruce Lee. That’s the amount of somersaulting and kicking this baby’s been doing

Our shortlist is Alina for a girl. And Kabir for a boy. Yes, I know neither of the names was on anyone’s shortlist earlier.

There’s also a fabulous cast of engaging characters like

If you’ve been pregnant, there’ll surely be at least a few incidents that rake up past nostalgia or disgust… and will make you smile or frown.

If you’ve gone through it with your family around, you’ll appreciate the innate honesty of a narrative that entertainingly depicts that fondly awaited special event of any Indian married couple, the one which evokes a repeated (even if unvoiced) question: