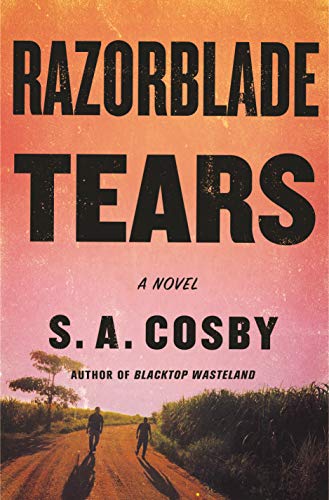 Razorblade Tears is the tale of two fathers who have suffered a lot through life – and then, are forced to suffer the most terrible loss of them all.

It’s the tale of how they react. How they fight back. And how they make amends.

Razorblade Tears is a tale of revenge – and redemption.

The world thinks of Buddy Lee as trailer trash. And we meet him for the first time in ‘Razorblade Tears‘ as he copes with shocking news.

The photo floated to the floor. Buddy Lee put his head in his hands and waited for the tears to come. His throat burned. His stomach was doing cartwheels. His eyes felt like they wanted to burst. Still no tears came.

Ike Randolph has almost integrated back into society, with his own business and a quiet existence. And we’re shown his raw emotion at the same loss.

Ike started to scream. It didn’t build in his chest first then erupt. It came out fully formed in one long savage howl. The heavy bag began to jerk and jump spasmodically. Technique was tossed aside in favor of animalistic instinct. The skin on his knuckles split and left red-hued Rorschach paintings on the bag.

Bring both these men together, and sparks are sure to fly.

Almost from their first meeting.

And then, they begin to plot deadly revenge against the people responsible for their pain.

“Once we start, I’m prepared to do whatever it takes to find these sons of bitches. If I gotta hurt some people, then that’s what I’ll do. If I have to punch somebody’s ticket, I’ll do it… I’m prepared to bleed. Are you?” Ike asked.

Buddy Lee leaned his head back and stared up at the sky… He lowered his head and locked eyes with Ike.

And right away, the story kicks into high gear.

A sequence of investigative steps taken by the duo bring them into contact with one person after another who may know the secrets they’re trying to uncover.

One stubbornly says nothing.

Another reveals a tidbit.

And a third breaks to confess a lot.

The two dark, dangerous, deprived fathers forge a deadly bond as they race in pursuit of a killer.

On the way, they crack heads. Break bones. And even kill a man who tries to kill them.

Ike knew what gave Buddy Lee’s eyes that murderous sheen. It was the rage coursing through his veins. A poison that killed off certain parts of yourself. The parts that made you weak.

Razorblade Tears is a wild, fast-paced story with incredible twists and turns that will keep you turning the pages faster in a hurry to know what’s next.

There are tears all the way through.

Because this novel is about the kind of loss that hurts. Really, really bad.

“I know if you was here you’d tell me to let it go. That it wasn’t worth it. Then I’d have to steal one of your lines,” Buddy Lee said. He rose to his feet. His eyes burned but he was too tired to cry. “This is who I am. I can’t change. I don’t want to, really. But for once I’m gonna put this devil inside me to good use.”

That usually leads to a certain response from a certain kind of guy.

And that in turn leads to more tears, of a different kind.

Tears ran from his eyes and stung his cheeks. Tears for his son. Tears for his wife. Tears for the little girl they had to raise. Tears for who they were and what they all had lost. Each drop felt like it was slicing his face open like a razorblade.

Razorblade Tears is a raw story rife with harsh emotions.

But it is also a gripping read that will hold you enthralled through the ups and downs of a viscerally driven reaction to events beyond a man’s control.

Or rather, two men.

And yet, fair men.

Razorblade Tears: A Novel is a story worth telling… a book worth reading.