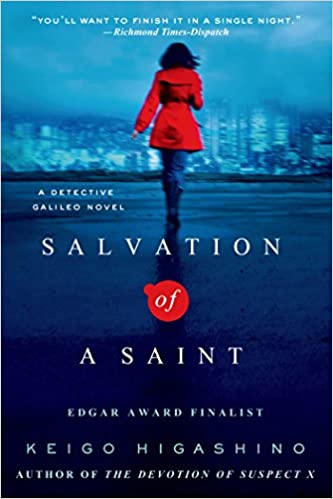 ‘Salvation of a Saint‘ is a mind-bending mystery novel which will stretch your imagination to breaking point… and reveal a twisted, demented side to how far desperate people can go when pushed beyond a point!

Okay, here’s the set up…

As the story ‘Salvation of a Saint‘ opens, a Japanese man and his wife, Ayane, have a rather provocative argument.

And at the end of it, she is shown thinking:

A few minutes later, they’re hosting a weekend meal for friends. Just three friends. And all are key to the drama that’s soon to follow.

Ayane leaves for a faraway city to visit her family.

A couple of days later, the victim is found dead. Traces of poison are recovered from an almost empty coffee cup.

Obviously, it seems, somebody spiked the brew.

But then, things get interesting. The mystery deepens. Because with all other utensils in the kitchen testing negative, it’s not at all clear HOW the poison got into the cup – or WHO put it there!

The hunt is on.

There are two detectives. A new recruit, rather a novice. And her experienced senior, who might have a crush on the top suspect!

Both investigate along parallel lines, pausing to exchange salient discoveries from time to time – each one throwing a wrench in the others’ theory of the case.

The tide of the investigation shifts first one’s way, then the other’s… at times seeming to exculpate the ‘dead cert’ murderer, and then suddenly reviving the possibility – thanks to yet another almost-overlooked factoid the diligent sleuths uncover by turns.

As the story unfolds, we learn about a tangled web of relationships, somewhat bizarre domestic arrangements, and a technically brilliant if perverted plan that ultimately claims the intended victim’s life.

Was the crime solved through sheer luck? Or was it brilliant detective intuition and analysis that cracked the case? And is there even enough ‘proof’ to convict the devious killer?

You’ll wonder all the way to the end… even if you figure out who the murderer was early on in the story.

I’m a fan of mysteries and grew up on a heavy diet of Agatha Christies and Sherlock Holmes and Perry Masons and Father Browns and sundry killers and crooks. Almost all led up to the Grand Reveal of a perpetrator, right at the end of the story.

And I have believed that was the best way to write – and read – a murder mystery.

Higashino proved the corollary – that a good mystery can be good, even without a focus on WHO… if it concentrates on building mystique and mystery around the WHY and the HOW.

In ‘Salvation of a Saint‘, the resolution of HOW is very satisfying.

Hence this book gets my strong ‘READ’ recommendation.