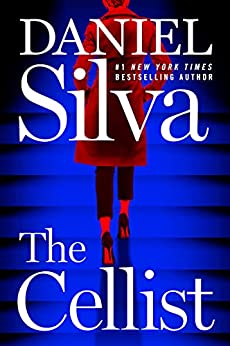 In this spy thriller ‘The Cellist‘, the daring assassination of a Russian agent inside his heavily guarded fortress in London sets off a hunt for the people behind it – and uncovers a far-reaching conspiracy with world-shaking consequences.

‘The Cellist‘ is my first novel by Daniel Silva. And as this is one of my favorite genres (has been for 30 years!), I’ve read some of the very best books and stories.

This book hits all the right notes.

The tension and pace of the writing matches the speed at which events move. The descriptions are just perfect, neither too brief nor too long. They get you engaged as a reader, and then leave you wondering about what just happened.

When Viktor Orlov is murdered despite all his elaborate precautions, it sets of alarm bells in the mind of ace Israeli spymaster Gabriel Allon. Rushing to London, he set to work piecing together what happened.

In a flurry of events, that hint at a frame up, we’re led to an intriguing explanation of how international money laundering works in the modern era – and introduced to a secret group that operates from the world’s financial capital, moving billions of dollars into untraceable bank accounts.

And we also meet ‘The Cellist‘. A music lover and fine player of several instruments, she uses these rare and superb gifts to win her way into the life of one of the close associates of the supreme Leader of Russia.

A cat-and-mouse game of plots and counter-plots unfolds. The excitement is edge-of-seat gripping. And the intelligence and cunning of both antagonists is put to the test.

With ‘The Cellist‘ becoming an unwitting pawn in the battle of Giants.

Will she manage to fool them all? Can she survive? And will the Haydn Group be taken down, despite its tentacles spreading into every corner of the global financial system?

Despite the book being over 450 pages long, I read it in a couple of long sittings – because it was so fast, exciting and interesting.

With that said, there’s also little that’s memorable or special about the story itself. A good, decent spy thriller with a few unique twists that’s well-written and nicely plotted.

If you read ‘The Cellist‘ you certainly won’t be disappointed. But for my money, I wouldn’t place it in the highest echelons of spy thrillers alongside novels by Robert Ludlum or Frederick Forsyth or John Le Carre.

‘The Cellist‘ is very good, without being great.