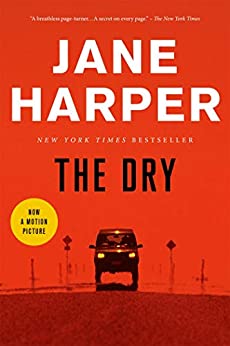 Like any passionate fan of crime fiction, I’m an avid and eager student of human psychology. (Or maybe it’s vice versa, who cares?) And for that genre of reader, Jane Harper’s ‘The Dry‘ offers a virtual treasure trove of reading pleasure.

I’ve always found it difficult to review a murder mystery.

That’s because it’s often where one’s ego gets in the way. I mean, you’ve invested a few hours trying to track down a fictional killer. In the end, you either succeed – or not.

And in either case, at least subliminally, you tend to let the cat out of the bag – in a very critical way, that lowers the enjoyment of a future reader.

Right from first page, ‘The Dry‘ hooked me into the story. And each successive chapter drew me in deeper, fast.

The psychological profiles of each of the potential killers is deliciously revealed, layer after layer – and at each reveal, you say to yourself: Why, THIS person could be the killer!

And then, something gnaws at that knee-jerk reaction. Another aspect of their psychological make up is exposed as the story unfolds. And you now find yourself wondering: But THEN, could they really be the killer?

I experienced this over and over, shifting my suspicions from one of the players to the next – and each time experiencing that thrill a Christie and Perry Mason aficionado will always feel while in hot pursuit of a deadly criminal.

Looking back after I finished reading the book, I had one minor grouse. But while writing this review, I knew that IF I were to even say what that was, it would automatically eliminate (for a future reader) a good half of the potential pool of suspects!

That’s why I’ve always found it difficult to review a murder mystery!

So I’ll stick with my ‘no spoilers’ promise and say nothing about it.

Do I recommend Jane Harper’s ‘The Dry‘ as a riveting, exciting and satisfying murder mystery?

I’ve read easily over 500 mystery novels, and this ranks near the top of the class. Without any doubt or hesitation.

The beautiful depiction of an Australian setting and the vivid descriptions of the people involved in the story. Not merely enough background to help relate the people to the crime, but more… to give a reader the sense of actually knowing, understanding and, to an extent, identifying with them as individuals.

All of these make ‘The Dry‘ a more enjoyable read than just a decent murder mystery. It may seem blasphemous to contrast such a raw, new writer with the Queen, but I daresay there’s more than a trace here of a potential Agatha Christie.

There! I said it.

That’s Big Talk, for sure.

But if you read ‘The Dry‘, maybe you’ll agree?