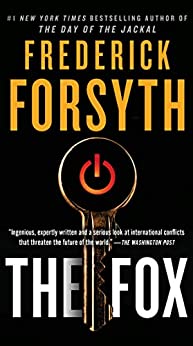 The Master is still at the top of his Game! The Fox is Frederick Forsyth‘s latest novel and a worthy descendant in the rich lineage of thriller/spy classics the author of several bestsellers is known for.

A fast-moving tale of a teen hacking prodigy, and how his skills might be deployed with devastating impact in today’s computer-controlled world, The Fox has all the elements of a FF novel – counter-espionage, political intrigue, international plots, ruthless assassins, and high-stakes drama.

And his art at weaving a gripping story hasn’t dimmed over the years.

“London is a researcher’s dream. Somewhere in that sprawling metropolis are archives covering everything man has ever thought, written or done since the first troglodyte emerged from his cave.”

The best spy thrillers have two equally matched antagonists striving for supremacy over the other. Ludlum had Jason Bourne against Alex Conklin in his ‘Bourne Identity‘. (See my Bourne Identity book review)

Forsyth himself had the assassin code-named The Jackal against inspector Claude Lebel in his ‘Day of the Jackal‘.

In ‘The Fox’, it’s Britain’s Sir Adrian pitted against Russian spymaster Krilov in the Game.

“Stuart Mackie sipped his replenished glass and made a speech. ‘Aye’, he said.”

These are the only two characters who’ve been as completely fleshed out as I would like. The rest are superficial, with just enough shared about them to match their limited roles in the story, which revolves around this duo’s battle of wits.

If there’s one ‘criticism‘ I’d level against this book, it’s about the pace – that seems somehow rushed or forced.

It sometimes seems as if the author is deliberately trying to wrap up this scene and skip ahead, either because he’s writing for an impatient audience that won’t wait for a more thorough build up, or (dare I say it?) because he’s kinda gotten bored of writing in this genre for almost fifty years, and just wants to get this done?!

Some parts sound to me like a personal reflection, as he grows older:

“The man was, he thought, remarkably young. But then, again, they always were nowadays. Advancing age is merciless.”

In Jackal, there were around 12 to 15 key incidents or pressure points in the story… and each of them was beautifully detailed.

The scene where the assassin tests out his custom-made rifle and makes final adjustments to it remains especially fresh in my mind, years and years later. The way the Jackal’s last shot, using the special soft-nosed explosive bullets, turned the pumpkin into pulp, was brilliant at showing the destructive power he planned to unleash against his victim.

There’s little comparable to that emotion in ‘The Fox‘, even though the technical detail and behind-the-scenes narrative is similar in depth and specificity.

Several separate incidents across the world make up the bulk of the conflict between our two protagonists, spicing up the read and holding my attention.

It’s also a relief that a novel set in the year it’s written (2018-19) doesn’t take recourse in obscure computerese, but limits the techno-babble to a simpler ‘air gap’ breach – and focuses more on the human element of espionage.

It seems like FF’s thumbing his nose at the scary potential of an impersonal artificial intelligence in the complex, confusing universe of international relations in our modern era.

If you’re a Frederick Forsyth fan, don’t miss “The Fox”.

Even if you’re not, you might enjoy the book if you’re into spy stories and enjoy reading books about international intrigue.