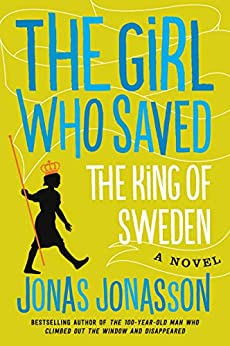 If you don’t mind running the risk of ‘dying from too much laughing’, then you might consider picking up ‘The Girl Who Saved the King of Sweden‘ by Jonas Jonasson. But be careful where you sit while reading – you could fall off your chair laughing!

Okay, okay… Maybe my sense of humor is, to put it charitably, perverse.

For instance, I’ve watched the Ashton Kutcher film “Dude, Where’s My Car” four times – and laugh like a madman at ever so many situations I think are hilarious… where my spouse of more “normal” humor will, at best, smile – or, more often, wince!

So when I read a book where, midway through the story, I find myself at this condemned building in Sweden where lived…

How a black girl, a latrine-cleaner under the apartheid regime, is enslaved inside a Praetorian nuclear research compound… where a drunken white engineer manages to build an “extra” atom bomb… which is then “accidentally” smuggled out into Sweden with three Chinese girls inside the crate as stowaways… is just the set up for the story.

What happens in The Girl Who Saved the King of Sweden as this motley crew tries to avert a nuclear Armageddon by handing over the atomic device to the Prime Minister (or, failing that, the King) of Sweden… while safeguarding it against two Mossad agents and an “inside gang” of republican anarchists who may use it overthrow the monarchy as a side-plot… makes up the meat of this crazy, freewheeling story.

A rollicking tale that’ll alternatively have you rolling around in stitches or giggling like a nut, as you scramble to keep track of a plot line that weaves, pitches and jackknifes in a bewildering, exhilarating and inevitable way… until it finally wends along to a foregone conclusion.

A handshake with a Prime Minister – and the King.

Oh, how simpler it might have been had Olaf Palme taken Nobeko‘s phone call and met with Holger One right in the beginning!

But then, if he (or the monarch) had, then you and I would have missed out on this laugh-fest… so maybe it’s all for the best!

Jonas Jonasson also wrote “The Hundred Year Old Man Who Climbed Out Of The Window And Disappeared”, which I LOVED and reviewed earlier.

If you enjoyed that, be sure to take a look at The Girl Who Saved the King of Sweden… coz if you’re tastes match mine, this is one, long, non-stop laugh riot!