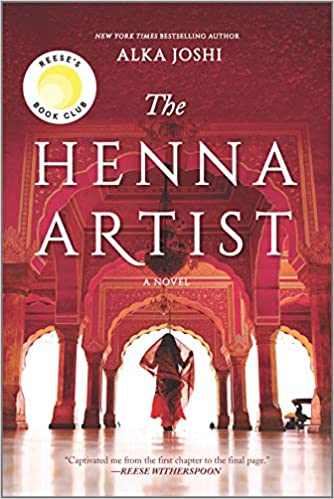 ‘The Henna Artist‘ is a pretty complex, deep telling that uses the background of a royal family and a traditional artist to address the social mores and events of an earlier era.

A writer’s language of preference is an identifier… as in English author, or Spanish writer.

“Before independence, these had signified my ladies’ admiration for the British. Now, they signified their scorn. My ladies had changed nothing but the reasons for their pretense.”

There’s likely good reason for the label, though. Indian authors do tend to share phraseology, and regionalisms in their choice of words. Even subject matter, or broad outlines of how characters think and act, are often similar.

“I plucked two frangipani blossoms from the vine and tucked them behind my ear. Tonight, I would put them in a glass of water, and wash my blouse with the scented water in the morning.”

Right from the start, ‘The Henna Artist‘ takes off as a narrative. There’s nothing in the writing that distracts or focuses attention on the writer’s nationality or ethnicity.

Other than the setting of the story and the character’s names and behaviors, the book itself could have been written by an author of any nationality.

After reading ‘The Henna Artist‘, I felt a sort of nebulous parallel with the iconic classic, “Gone With The Wind“.

In this sense: both are books you flip through, eager and curious to learn more about what happens to the principal protagonist.

The writing is beautifully vivid and compelling.

“It was his eyes I found the most appealing; a rich brown with the striations of a glass marble, alive with curiosity, ready to be amused. Even when his face was still, his eyes could flirt, coax, tease.”

I could literally see those eyes!

As a child, I had a favorite brown marble, with just such striations. In a million years, I’d never have thought about using it in a description of someone’s eyes… but can see how beautifully it works here!

While there are several threads beautifully woven together into this engaging story, I find myself pulled as if by gravity towards one character in the narrative – the Henna Artist herself.

And like the eternal classic which is among my personal favorites, Alka Joshi’s “The Henna Artist” isn’t a book I’d attempt to review as a whole.

That would take at least another couple of re-reads. Because it’s a pretty complex, deep telling.

Childlessness and ancestry, for instance, is one that runs through the story line.

“The Maharani Indira stilled her hands. ‘At least she has experienced motherhood,’ she said.”

“The hothouse appeared to be the maharani’s nursery in more ways than one.”

Short sentences that encapsulate the searing pain of a seemingly powerful royal who remains childless… and yet is called upon to empathize with another maharani who has lost her’s.

Healing from pain and suffering is another.

“As I’d tended her body these past few weeks, I’d sensed the steel of her muscles, the resolve in her tendons, the strength of the current in her veins. She was a woman who would always look forward despite setbacks.”

The Henna Artist is eventually a healer. She uses her skill and traditional art to this end.

“This was how my saas had taught me to show my love. Not with words or touch but through healing.”

But in a story about her work, many deeper themes are explored and thrown open for debate or discussion. ‘The Henna Artist‘ is an ideal book to read as a group – and talk about for expanding one’s own thoughts and feelings about them.