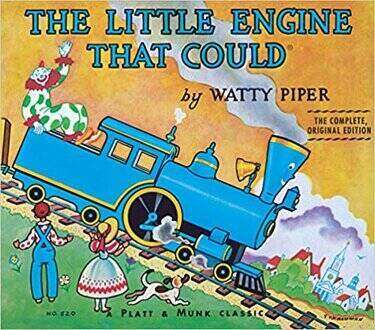 The Little Engine That Could is one of my all-time favorites… a fairytale from the Golden Books series that I first read when around age five – and have since made it a point to re-read at least once every 5 years!

The Little Blue Engine is tiny, smiling, cheerful and hopeful. In the face of despair, indifference and pessimism, he’s the only guy who picks up the mantle of a challenge with the war cry:

This story is about a train load of Christmas gifts that breaks down – without another engine left to pull it over the hill to reach a valley beyond.

The ‘The Little Engine That Could‘ begins with:

And then, disaster strikes. All of a sudden, she comes to a halt with a jerk. Try as she might, her wheels won’t turn!

Are dozens of excited children to go without their presents?

Giraffes with long necks. Teddy bears with almost no necks at all. The funniest little toy clown you ever saw. Toy engines. Airplanes. Jack-knives. Picture-puzzles. Even big golden oranges and red-cheeked apples.

Although many pass by, each has its own excuse or story. For reasons funny or fair, none of them is willing to even give it a try. Not even after emotional appeals about the disappointment of tiny tots across the hill!

The Shiny New Engine is too proud.

The Big Strong Engine is too important.

And Rusty Old Engine is too tired.

Finally, the Tiny Blue Engine comes chug-chugging along merrily. And hears about the problem.

He has his own doubts. Isn’t sure if he can do it.

“I’ve never been over the hill,” he thinks.

“They only use me to switch trains in the yard.”

The dolls and toys try to convince him. “But we must get over the mountain before the children awake!”

With time running out and no other options left, the Little Blue Engine steps up.

“I think I can,” he huffs as the toys hitch him up to the wagon.

“I think I can,” he puffs as he struggles to crest the hill.

“I think I can,” becomes his driving force as he conquers his demons – to win.

His only reward is the smiling faces of delighted children.

I must have read ‘The Little Engine That Could‘ a hundred times.

And recalled it in my mind many more.

It has conditioned the way I think. Helped me overcome hurdles. And comes in handy during crunch situations.

A magical mantra. A powerful philosophy. An inspiring incantation.

It entered my mind through the medium of a children’s story book.

Over the decades, I’ve recommended this phenomenal little book to dozens of people.

But if you ponder the deep meaning of this mystical little fairytale and imbibe the message of the The Little Engine That Could into your mind firmly, a lot of things can change.

Read it aloud to the younger kids in your family.

Watch the older ones read it themselves.

And even if you’ve already enjoyed it, be sure to go back every now and then – for another read.

I’m off to do just that… right now!