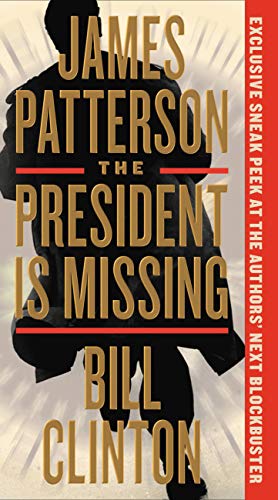 ‘The President Is Missing‘ by James Patterson and Bill Clinton is an interesting collaborative effort of a best selling writer of mystery thrillers – with a former President of the United States!

After reading a few of his Alex Cross novels (which I quite enjoyed), I gave up on James Patterson.  That’s because of the surfeit of overly graphic, (and, in my view) unnecessarily brutal violence in his books.

But when I saw that he’d co-authored his latest book with a past POTUS, I was intrigued enough to pick it up. Plus the story synopsis sounded intriguing. Imagine the President goes missing for 3 days in the eye of a terror threat in the capital!

‘The President Is Missing‘ is a fairly decent Patterson novel.

It has the typical style and energy of a thriller penned by the master storyteller. An over-the-top plot. Fast paced action. A certain degree of suspense that’s retained through to the very end.

What’s different from his typical work, which I imagined to be the contribution of former President Clinton, is the rambling opinions about Americanism, values in public life, and general stuff that isn’t often a part of the bestselling writer’s novels.

The tale moves along at a brisk clip and a reader gets precious insight behind the scenes of life in the White House. It ends in a satisfying climax that will not leave you wondering why you picked up this book.

As an easy weekend read, or to engage you on a long flight. ‘The President Is Missing: A Novel‘ is not a bad choice at all.