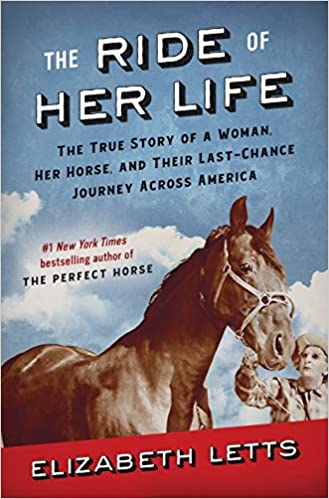 Tracing the daring adventure of a 60-something lady – who hated being called ‘Jackass Annie‘ as a child – along with her four-legged pals Depeche Toi and Tarzan (later joined by Rex) across the continental United States… ‘The Ride of Her Life’ quickly turns legendary.

Some books you remember fondly for their fabulous language, vivid imagery and captivating storytelling.

Other books you will never forget because the message was so timely and apt at the moment you read it.

Rarely, both coincide – and a book enters the rarefied echelons of being special to you in a personal, intimate way.

‘The Ride of Her Life‘ by Elizabeth Letts happens to be one of those.

And I consider myself really lucky… because somewhere soon after the first few pages, I almost gave up on it!

Things seemed to be going nowhere fast. And the description of an elderly woman struggling against the odds on her lonely farm in Maine but losing the relentless battle… well, it all seemed rather dull.

Until our heroine Annie Wilkins made her fateful decision.

That’s when, instead of bailing out on this delightful book, I found myself literally throwing fist pumps in the air at each twist and turn, silently egging along my all-of-a-sudden favorite heroine on her impossible but challenging dream.

As they walked away, she kept her eyes turned forward — refusing herself a single look back at the place she’d lived in most of her life. She figured she would most likely never see her home again.

What a lovely account of a horseback ride across a continent this book is. Truly on the ‘The Ride of Her Life‘, Annie comes across some amazing people in one State after another.

“That was when Annie realized that she wasn’t just riding for herself—she could carry other people’s hopes and dreams along with her.”

She gets to know her travel companions better – the faithful terrier Depeche Toi.

And her sturdy steed Tarzan.

The gelding gazed at her with friendly interest, not unlike the way she looked back at him. Both smallish and square, both Maine-bred, both a little past their prime and a bit scraggy around the edges—and both needing a new home. And Annie recognized the flash in his eyes. He was down, but he wasn’t done.

As well as the sedate and noble Rex.

And also… her own self.

But one thing Annie had figured out in her almost sixty-three years of life was that although you could dip your toe in a pond on a summer day and guess how cold it was going to be, you never really knew for sure until you plugged your nose and closed your eyes and jumped all the way in.

The journey itself is so beautifully depicted that a reader feels transported in time and place to the America of 1955.

Sprinkled with lovely historical tidbits and news items of the regions Annie’s journey takes her through, this narrative offers a snapshot historical overview of a period in American history that everyone can appreciate and enjoy.

The author’s commentary nicely counterpositions the past and future against the present which is in flux.

You get a great sense of the seismic social shifts resulting from the automobile and television, which will forever change things from the way they’ve been.

Senator Joseph McCarthy had whipped up the fear of Communist infiltrators with his inflammatory rhetoric. “Be vigilant day and night” he scolded.

And the mini-adventures, scares and challenges that Annie and her boys face on the long, lonely, uncomfortable yet beautiful route with its wrong turns and strategic mistakes galore will amuse and amaze a less hardy soul than a saddle tramp like her.

“Courage isn’t everything,” Nellie had said. “It’s just one thing.”

But right then, she was taking charge of the situation instead of just letting fate push her along. She was too young to be cooped up in an old folks’ home while she still had breath and fight in her, and too proud to accept charity when she was sure she could still do some work.

Courage is just one thing — but right then, it was the only thing she had.

This is a book with a deep and impactful message.

Of hope and determination. Of dreams and exploration. Of fierce independence and an overwhelming desire to be free.

Of a total disdain for material trappings in favor of a yearning to follow an impossible dream.

Of an open-minded willingness to take life one day at a time, with faith, optimism and a cheerful attitude.

Annie had the graciousness to receive gifts, accompanied by a fierce determination not to be a burden.

There are setbacks that might faze a less committed rider.

There are near-fatal accidents that would break the nerve of a lesser woman.

There are scary incidents that might wreck one’s trust and belief in people.

Yet Annie rides through them all, unaffected and hopeful. Because as her father often told her, the only way to get there is to keep on going.

Few other books have made me tear up as often as ‘The Ride of Her Life‘. And a precious handful have left me as inspired, energized and rejuvenated about the way I see my own life and future as this one.

In that sense, ‘The Ride of Her Life‘ is truly transformational. I will never be the same again after reading Annie’s story and meeting her boys. And I also have a deeper, richer understanding and feel for the country she travelled in the mid-1950s.

Reading this delightful travelogue may well become ‘The Ride of YOUR Life‘!