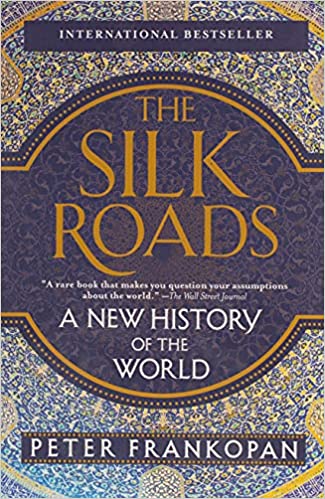 If you’ve grown steeped in a Euro-centric paradigm about history, Peter Frankopan’s ‘The Silk Roads‘ will come as a shock. And it will open your eyes to a glorious civilization rooted in the Byzantine empire during what’s typically known as the Dark Ages – but was really not!

In all of these narratives, the Byzantine empire and Constantinople seemed to me, somehow, to be kept peripheral. At the edge of the canvas. Being important, yet not taking center-stage.

But in Peter Frankopan‘s book “The Silk Roads“, all of this changes.

He shifts the frame of historical story-telling eastwards, placing the Middle East right at the very centre of the world – where it had been for a long, long time.

His work shares a provocative hypothesis.

That European history was deliberately tailored to foster the idea that the continent bears the mantle of a glorious past, handed over from ancient Greeks and Romans.

That it was re-worked to assume a non-existent continuity with a rich, vibrant cultural heritage from earlier times.

And he makes a brilliant case for this theory.

In fact, so nicely is it done that I’m beginning to understand why other historians may have made it seem as if Constantinople was somewhat out of focus, and western Europe is the geographical region under the lens.

Post-medieval Persia, Asia Minor, Asia and China were realms of unimaginable wealth and prosperity, culture and sophistication. So much so that every adventurer, fortune-hunter and conqueror turned his sights upon its riches and treasures.

Some came to plunder. Others to trade. All, however, ended up prospering wildly.

The lovely story-telling tracks how administration and religious evolution followed in the course of trade and commerce, and the way they grew together in a symbiotic relationship that nurtures and nourishes each.

From a zoomed-out perspective, I kept thinking of the analogy of waves striking a shore. Each one breaks upon the sand, frothing and foaming at the edges, wetting a section of the beach…

And then recedes back into the ocean, leaving the land it touched richer – and different – from the way it used to be.

Then, the next wave arrives… changing everything all over again!

Covering wide swathes of historic time in broad sweeps of engaging narrative, The Silk Roads paints on a wide canvas that fills in many lacunae of world history over the ages.

Starting right from the time before the Crusades, it takes a reader all the way up to contemporary problems while I was growing up, like

‘The Silk Roads‘ contextualizes all these seemingly disparate events within a logical, strategic whole of Cold War intrigue and conflict.

The fallacy of Western policy in the Middle East and its devastating consequences on world peace are addressed bluntly, even cruelly. The veil of double-speak and euphemism is stripped off many shenanigans that led to modern tragedies like 9/11.

The final chapter is a mind-expanding peek into the future of the old Silk Roads area.

Even if you don’t have time (or the interest) to read the entire book, I highly recommend studying this one section alone to get some insight into how decisions behind huge investments in networks and infrastructure (worth hundreds of BILLIONS of dollars) are being made today – to position countries like China for dominance in the region tomorrow.

In the end, however, despite parts that are wondrous and awe-inspiring, this is a book that left me sadder, even if wiser.

Shortly after I started reading ‘The Silk Roads‘, I found myself wishing it had been part of our high school history curriculum in 9th or 10th grade.

Now, as I’m finishing it, I no longer feel that way.

The reason is that, like some things one learns about in medical school, this book exposes you to the kind of knowledge, information and insights that’ll forever shatter your innocence.

You can no longer remain content and comfortable in the naive assumption that wise, balanced and far-thinking minds are in charge of our foreign policy and global interactions.

Or that our leaders work tirelessly for the peace and well-being of the world.

You’ll be shocked and scarred by the cruelty and ruthlessness of powerful human beings.

Tarnished and tainted by the innumerable examples of self-serving, short-term thinking that’s justified by the logic called ‘realpolitik’.

Contaminated and corrupted by the realization that we, too, are a part of this mess… if not by acts of commission or collusion, then at least by omission.

In endless conversations with my teenager, I’m prone to keep harping:

“You’re not yet exposed to the wider world out there, but are confined within a smaller bubble.”

This book demonstrated starkly that the statement is just as true… about me.

As a die-hard optimist, I’ve chosen to adopt a worldview that sees humanity as being, overall, positive and upbeat.

To see gems of inspirational and motivating acts of humanity as being the core and spirit of our species and race. To embrace wholeheartedly a belief system that people, given the chance, will choose right over wrong, good over evil, progress over retardation.

And this review of human history, over not just a few years or decades, but tens of centuries, brings home very powerfully the uncomfortable truth…

Ours is essentially a breed of horrible invaders, cruel pillagers and ruthless tyrants, complicit in exploiting both nature and weaker communities in a headlong reach for ever more.

All these are constants in human history… across a 2,000 year account!

Before having this insight, one might exist inside a bubble of self-delusion. But not after reading ‘The Silk Roads‘!

That the world, in reality, is a mean, cruel, horrible place – broadly speaking.

Within it are pockets of decency and beauty, creativity and concern, empathy and caring. If we are lucky to inhabit one of them, good for us. But it doesn’t reflect the general scenario, or even a majority of it.

That’s the hardest lesson I’ll take away from Peter Frankopan‘s masterpiece of historical narrative, “The Silk Roads: A New History of the World“.

It’s a book I’ll rank right up with

As a book that opens our eyes to the world we live in, shows us how it changed, grew and evolved under pressure from an innovative human spirit, and brought us to where we are today.

In other words, ‘The Silk Roads‘ is a book to read if you want to understand the world better.

(It’s 672 pages long, and you’ll need specific reading strategies to stick with it.)