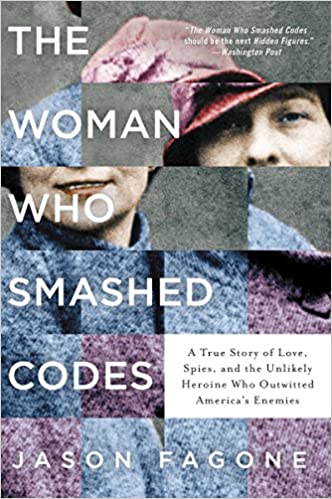 When “The Woman Who Smashed Codes“, a riveting tale of Elizebeth Friedman, the greatest lady codebreaker of WW-II, ended… I wished it hadn’t. Because after being so deeply immersed in a fascinating narrative, it felt like being rudely wrenched back into the “real world”.

Sometimes, rarely, you enjoy reading a book so much that you actually feel sad when it ends. It’s what happened when I neared the close of an engrossing tale about the life of a spy who saved the world.

“Over and over again, gazing at what seemed random in the world, Elizebeth found a tiny spot of sense, and then she stood on that spot and invented a system to transform the rest of the landscape all the way out to the horizon, and this is still the process today.”

Not only is Elsbeth a captivating and inspirational protagonist, the storytelling style of the author Jason Fagone is superb.

“She had the Nazi brain in a jar on her desk, alive and glistening, electrodes running out to her pencil. The unit had conquered every new circuit, every new code that came online that year.”

And the undercurrent all through the narrative is a powerful romance between Elizebeth and her more famous husband William Friedman, who conceived what has become the NSA today.

Right from the beginning, when:

“The modern-day universe of codes and ciphers began in a cottage on the prairie, with a pair of young lovers smiling at each other across a table and a rich man urging them to be spectacular.”

All the way to when William returns from Europe at the end of the War, and:

“Elizebeth opened the door. She cried out in joy. His clothes were wet. His moustache was wet. She reached up and threw her arms around him and squeezed as hard as she could.”

There are so many brilliant quotes and phrases, passages and sentences, that I highlighted in the book.

“And there comes a day when Elizebeth just thinks: no. There is nothing wrong with me. What’s wrong is with other people. This is the moment that hurls her out to the rest of her life… The savaging of Nazis, the birth of a science: It begins on the day when a twenty-three-year-old American woman decides to trust her doubt and dig with her own mind.”

And you’ll probably notice several more as you trace the riveting story of a team of cryptanalysts as they scramble to decode secret messages that may well make the difference between winning a war… and losing it.

“These pieces of paper saved lives. They almost certainly stopped coups. They put fascist spies in prison… They drove wedges between Germany and other nations that were trying to sustain and prolong Nazi terror. By any measure, Elizebeth was a great heroine of the Second World War.”

So read all about ‘The Woman Who Smashed Codes‘. It’s an exciting, interesting and heart warming story, told by a master wordsmith in a really engaging style and tone.