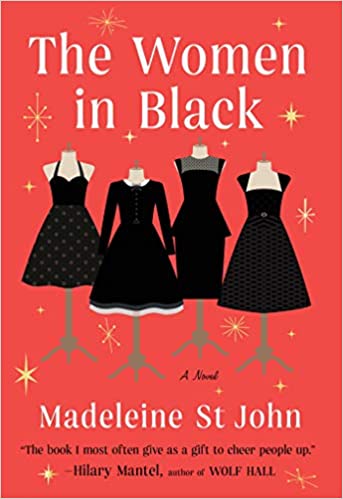 Reading ‘The Women in Black‘ by Madeleine St.John is like lying on a soft, warm, thick cushion or mattress on a cold night… and sinking ever so gently into a comforting embrace. The beautifully-told story slowly engulfs you, until before realizing it, you find yourself immersed in their dull, routine, mundane lives.

“Now then. Young girl. New frock. Box of chocolates. That’s all just as it should be!”

There. I just began with the end.

This will sound weird!

I’ve read books where I cheered on an international spy trying to save the world from destruction; an ace detective hot on the trail of a serial killer; a hopeless lover trying to woo her heart throb; an activist standing up for whatever she believes in; a hero on an impossible quest for redemption or salvation.

And a whole lot more.

But for the life of me I cannot remember ever reading a book where I cheered on a teenage girl… as she decides to buy herself an overpriced frock!

And then, feeling such a rush when she finally makes up her mind.

But then… this is a strange book.

I was intrigued by ‘The Women in Black‘ after learning it was the author’s debut novel… and only published when she was in her fifties!

In any other writer’s hands, this kind of story might be dull and boring. But even this narrative of a rather drab daily grind becomes magic… irresistibly sucking in a reader like a magnet pulls at steel.

“Her husband Frank was a bastard, naturally… He was a bastard of the standard-issue variety, neither cruel nor violent, merely insensitive and inarticulate.”

‘The Women in Black‘ sell clothes at Goode’s in Sydney.

And if anybody told me I’d soon be raving of a book about five – or six, maybe seven, or is it eight? I really didn’t keep count! – sales girls who are going about their day to day lives…

I’d have laughed out loud!

But as I began reading it, like treacle the story engulfed me in a sweet stickiness that was impossible to ignore, reject or escape!

You’ll become enraptured by that very ‘everyday dullness‘, and see the magic in commonplace events and incidents and people.

The key to this magical transformation is the writer’s incredible talent and attention to detail.

Words bring these ladies’ lives into such clear focus.

“She glanced at the bedside clock: it was ten o’clock. She wondered for a moment whether she would get up and go to Mass, and then she turned over and went back to sleep again. I need it more, she said to herself, God knows.”

You feel as if you’re right there beside them, going through those experiences and interactions alongside them, and gradually becoming a part of them as they, too, seep into your brain.

And charm you with their little lives.

“She was experiencing for the first time that particular species of love-at-first-sight which usually comes to a woman much earlier in her life, but which sooner or later comes to all: the sudden recognition that a particular frock is not merely pretty, would not merely suit one, but answers beyond these necessary attributes to one’s deepest notions of oneself. It was her frock.”

There’s some drama, but not a lot.

There’s the occasional ripple of excitement, but nothing special.

“The point is they are happy together now. It is the only possible beginning. The middle and end must take care of themselves as they always do. Or not, as the case may be.”

There’s however plenty of human-ness in this lovely story that anyone who enjoys writing style, language, and character development will surely appreciate.

Is The Women in Black a book to suit all tastes, to read at all times?

But is it a book that will be satisfying, memorable, and for that reason alone, remarkable – given how uninteresting you think the subject matter would be?

If you do read it, please let me know if this is how you feel, too.

“People expect men to be clever. They expect girls to be stupid or at least silly, which very few girls really are, but most girls oblige them by acting like it. So you just go away and be as clever as you can; put their noses out of joint for them.”

If you read for the sheer joy of enjoying brilliant writing…

If you read for inspiration with your own writing…

If you like stylish prose, great language and brilliant storytelling more than other elements of a book…