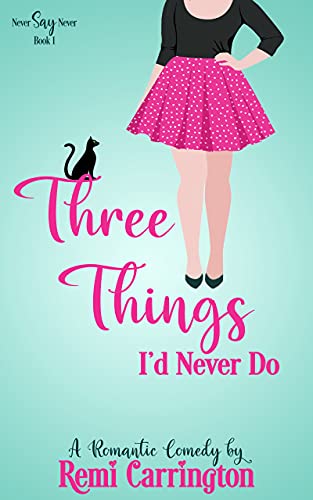 A warm, easy romantic story that matches up an unlikely Adam and Eve under truly remarkable circumstances – and traces their growing fascination with each other, alongside her obsession with ‘Three Things I’d NEVER Do’!

I don’t often pick up titles in the rom-com/chick-flick genre and so this book review of ‘Three Things I’d Never Do‘ by Remi Carrington may not be worth the pixels they’re written on!

Still, what caught my interest was the blurb on a book launch website. And so I got to read a story that begins with a rather intriguing hook.

A young lady is taking a bath – when a tree branch falls through the roof, pinning her in place.

And then, a strong, handsome fireman arrives to rescue the damsel in distress… only to find her in an awkward, embarrassing situation.

From there the story progresses along an interesting line.

And evolves into a blossoming romance – that involves our ‘nude at first sight‘ heroine breaking two of her 3 Golden Rules.

Her best friend Haley wonders if she’ll also do it with her third – and most fanatically held – one.

Well, does she? And what is that rule?

Eve is vehement in her denial.

But then as their romance blossoms, as secret dinner or coffee dates reveal a considerate, generous nature to the man she’s falling for, she’s no longer quite sure.

And after a sequence of diverse incidents, nicely developed to show the characters growing through a relationship, it seems as if (even if Eve does decide to abandon her third rule!) that it will be more a choice than compromise.

There were several nice bits and pieces to the story.

But I think a book review ought to also deliver a big picture overview of the story as a whole – and to do this, I’ll cheat by pulling two quotes from other people’s reviews of ‘Three Things I’d Never Do‘.

The first one is spot on. ‘Three Things I’d Never Do‘ is indeed like one of those…

“Sweet hallmark movies, where you roll your eyes but keep on with it.”

Far fetched coincidences compete with ‘too-good-to-be-true’ personalities in a fairy-tale narrative that begs a reader to abandon reality and succumb to the fantasy world entirely.

If you succeed, this will be a rather enjoyable read. But if you stubbornly insist on computing the chances or probabilities of something happening, well… you’ll be pretty frustrated.

With that said, there’s another review recommending that you “drop what ever you’re reading and grab this one right now!”

And that’s NOT spot on.

This is more the kind of book which you get around to… whenever you can or want. I chose it in between more intense reads – and for that reason, it was a welcome break.

A light-hearted and upbeat romantic novel with a feel-good ending is great for variety when you’re gorging on books about cosmic cataclysms (like Isaac Asimov’s ‘A Choice of Catastrophes‘), or a violent revenge murder tale (like ‘Razorblade Tears‘ by S.A.Cosby).

‘Three Things I’d Never Do‘ has cliches galore – not least being the names of the romantic duo… Adam and Eve!

And the pets having to be compatible before their humans can think about it.

My only disappointment was with how the book was represented as being ‘laugh out loud‘ funny. Though it had some humorous moments, mostly situational, none would qualify as warranting a protective cover for your Kindle or laptop!

Still, it’s a nice, cozy read for a rainy afternoon – if you’re in the mood for a light, comforting romantic novel.