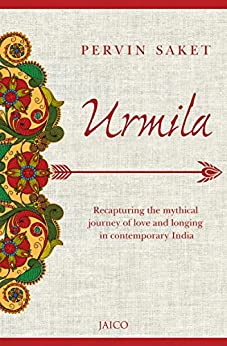 ‘Urmila‘ by Pervin Saket is a lovely read that appeals on many levels. It’s a story that will take an egg-whisk to your feelings, stir up emotions and get under your skin.

Having recently read Kavita Kane’s book about Urmila, I appreciated the parallels Pervin loosely draws between her heroine and Lakshman’s wife in the Indian legend.

But this is a different story.

It’s fundamentally the tale of a girl from a middle-class Maharashtrian family living in crowded, cosmopolitan Mumbai. She marries into a wealthy family, cares for her elderly parents-in-law, and craves the love and affection of her rather detached husband.

What sets Urmila apart is the author’s skill in turning this rather mundane tale into a masterpiece.

There’s the fictional spice of drama, liberally strewn through the book.

They quickly carry forward the story, with sprinklings of social themes and mores that provoke thought, or maybe urge a disdainful smile out of a rational reader.

Like Vanita’s ‘manglik’ status, and how it impedes matchmaking attempts.

Or the corrosive impact of living room gossip, where the sharp knives of scurrilous tongues inflict painful, then deadly wounds on the unfortunate girl – eventually driving her out of the family home.

Or Urmila’s burden of tradition, a sense of duty to the family she married into, that leads to fourteen long years as ‘unpaid caretaker‘ to parents of the man who married her – and then abandoned her.

And there are liberal doses of age-old Indian superstition and blind belief, to which diverse characters cling on fondly, even desperately.

What makes Pervin Saket’s ‘Urmila‘ stand out as a book, though, is the rich, vibrant, deep and colorful characters in it.

Each of them adds dimensionality and depth to the storytelling in their own unique way, turning what might otherwise be a rather dull, routine tale into a magical novel that disturbs, delights and dumbfounds you by turn.

There aren’t many strong male characters in this book. The men are almost mere background, setting the tone of the narrative. Like stage props, necessary without being essential.

Because this is a book about strong women.

Women who are tough enough to take anything life chucks at them, and still smile. It’s a book I want my daughter to read, so she can learn from it. And my wife, so she can bask in its warmth. And my mother, who’ll probably smile in enjoyment.

Layered atop all of this are the emergent themes that give the book its superpower. Because, in the end, this is a book about love and rejection. About abandonment and survival.

And that is often painful.

So in ‘Urmila‘ you have

There’s this point, deep into the story, where Ma calls with a shocking piece of news.

As a reader, you’re silently crying to yourself: “No, Urmila. NO. Don’t do it. You deserve better.”

Because you know that, if it were you, you wouldn’t do it. And by then…

She has seeped into your mind, becoming a part of you.

So a few pages later, you heave a sigh of relief when she chooses correctly… once again. As the story wends its way to a satisfying close, you wonder:

What just happened there? How did I get so closely entangled with this woman named Urmila?

And that’s when it hits you.

You’ve been reading a great book!

There are things that are especially unique to this book which makes it one of my favorites.

The first is how brilliantly Pervin tackles the passage of time through the story, which flicks and flits from past to present, seamlessly and smoothly.

“Each moment is distinct. One moment may stretch on, another just gallop by; one may be a distant memory and another may expand until it spreads across every experience.”

In a beautifully crafted scene, Urmila combats crushing depression. Neither able to nor interested in doing anything, she is gifted a book with pages of different colors.

And in them, she writes.

Writes to save herself… literally.

She surprises herself by numbering the notes, although she chooses to write on random pages.

So you get to read them out of order.

Each note reflects a step in her painful progress from intense suffering and pain, to a place of existence and simply hanging on.

It’s such a lovely exposition of the quantum physical concept of unordered, non-sequential time, one that I’ve never before seen represented in such a delightful way.

And the book itself is like that, in a sense.

Swiftly the scenes shift across the years, yet as a reader you barely feel a bump as the story flows gently, smoothly along.

The next unique element of ‘Urmila’ is her love for Art and Color.

Urmila’s painting mirrors her turmoil. Award-winning creations reflect her longing for an absent lover, her struggle to handle rejection, her vainly reaching out for what’s stubbornly beyond her grasp.

“My art is my only ally in this search for love. The strokes tell my story and the canvas soaks away my rejection.”

And then, her deepest craving is fulfilled.

All of a sudden the ideas dry up. Colors desert her. Her creative energy gets diverted from forming and shaping things on canvas into a more tangible, throbbing reality.

“The eyes had stopped looking. They were opaque, no matter what strokes I used. No longer were they fiery and probing.”

When she looks at herself in the mirror, she sees another person.

Calm. Restful. She is at peace.

With her place in it.

She has come back to exactly where she began, where she always was – but sees herself differently.

And there are linguistic flourishes and deeply resonant phrases that will keep you flicking back a few pages to enjoy them over again.

“The moment a desire dies is a sharp one. As pointed as the splutter of a mustard seed, as shrill as a whine, as heavy as a star on a clear night.”

That will linger in your mind for long.

“Those were the days tinged with the anticipation of desires that I wished would always evade me.”

“I wonder at the sweep that drove us from childhood companions to middle-aged strangers, dissolving all the years in between.”

It’s uncomfortable, in a pleasant way. It will keep you up late at night wondering. And it woke me up early in the morning to share this review with you.

I hope you’ll read ‘Urmila’. I hope you enjoy it as much. I hope you, like me, become her friend.