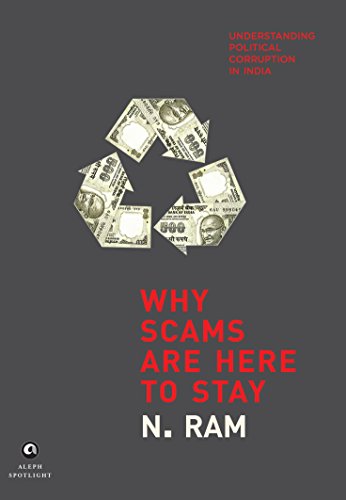 Corruption is a dirty word. And this is a book about it. An analytical, informative and data-backed expose of the kind of rampant abuse of political and other kinds of power to enrich an elite, ‘Why Scams Are Here To Stay’ is a dismal, realistic treatise on the realities of modern power politics.

This book will make you sad.

I’m a die-hard optimist. I can see the good in (almost) everything. And even then, I struggled to find a positive perspective on pervasive corruption of the order and magnitude revealed in N.Ram‘s book, “Why Scams are Here to Stay: Understanding Political Corruption in India”

Coming from the investigative journalist who spearheaded the (then) biggest expose of political corruption in India, unleashing a media blitz over the mid-1980s Bofors Howitzer payoff scandal, this account carries the weight, authority and credibiity of a true expert.

One who has studied corruption in all its dirty facets. Seen its reflection in multiple mirrors. Been horrified by its many distorted images.

And has come to terms with its versatility, ubiquity, and even (reluctantly admirable) creativity.

And so I feel disappointed and discouraged as I plow through one chapter after another, listening to tales of a kind of systematized and endemic corruption that cuts across party and regional lines.

Corruption that unifies itself in only a pervasive rape of a nation’s wealth and resources to the detriment of the masses.

And that has an irresistible seductiveness that eventually seems to lure everyone who falls within its tempting ambit – just like anything with mass is sucked into a blackhole!

Of course, there are a few ‘good eggs‘ who try to swim against the powerful current.

But the sloth and lethargy of investigative agencies and the inertia of a slow-moving judiciary process that defers any judgment over crimes of corruption by years, if not decades, eventually wears them down.

It’s heart-wrenching to see the final segment of the Bofor’s incident sub-titled: “But what good came of it at last?”

A philosophical author’s fatalist tone of resignation and acceptance is summed up in the poignant phrase that ends his chapter:

“And that was that.”

Even after factoring in (to my best ability) the author’s socialist leaning and political affiliations, this is still a depressing narration.

There’s no arguing against data. And the data compiled by Mr.Ram is as convincing as it is soul-crushing.

“Journalistic investigation had done virtually all it could, proved its case in the court of public opinion, and made a worthwhile difference to politics by bringing the issue of grand corruption to the fore.”

I finished reading ‘Why Scams Are Here To Stay‘, not with a tinge of optimistic anticipation for the future, but a dull disgust for the present.

This notwithstanding the suggested “solution” (under nine broad heads).

Will this frank, detailed and piercing account of the evil of corruption in our politics, our society, our lives change anything?

I’d like to hope it will. Though I’m not sure it’s even possible. And to a die-hard optimist, that’s an intolerable position I must learn to come to terms with.

It will take time. And maybe I won’t. Ever.

Because, still, stirring deep beneath the realism and pragmatism is an undying glimmer of a powerful feeling called… HOPE.